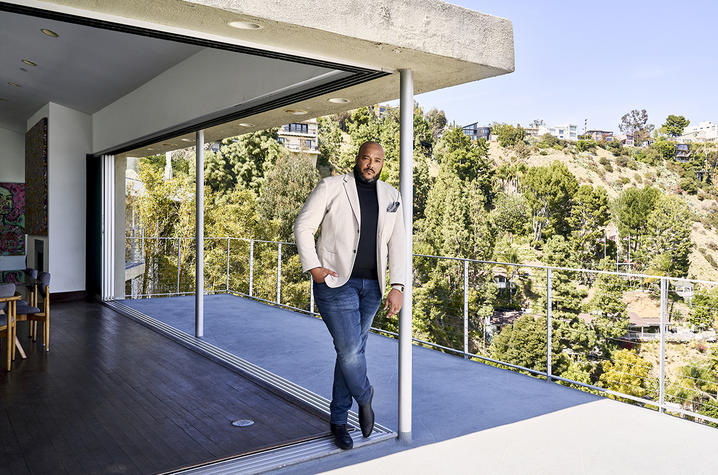 What does it mean to be a changemaker? By definition, it is someone who is taking creative action to solve social injustices.

In every sense of the word, Rhett Lindsey is a changemaker.

His vision of the world is one where everyone feels empowered to respond efficiently and effectively to societal challenges.

“I truly believe that everyone has a story to tell,” he said.

Lindsey’s story begins in Atlanta, Georgia, where he was born and raised, and where he created a tight-knit community.

Lindsey describes his childhood hometown as comfortable. “Growing up in one community all my life, I wasn’t naturally exposed to other cultures.”

After graduating high school, Lindsey was faced with a difficult decision — where to attend college.

“When I first stepped foot on UK’s campus, I immediately felt a sense of heart from the community,” he said. “From the athletics to the nationally ranked programs, everyone I was surrounded by had a passion and genuine heart for the university in one way or another.”

That same year, Lindsey left the familiar behind and traded Atlanta for Lexington to become a Wildcat. “When I first arrived at UK as a freshman, I initially did what felt comfortable and familiar — socialize with fellow students that looked like me.”

But change isn’t made within the confinements of comfort.

So, Lindsey embraced change — and the apprehension that came with it.

“I soon learned that UK offered opportunities for students to interact and connect with fellow students from all walks of life through different social events, organizations, classes and activities,” he said. “I participated in the theatre department, worked with Big Blue Nation LIVE and was involved with the Martin Luther King Center on campus. UK allowed me to step outside my comfort zone and meet and embrace people outside of my community — even if our opinions, personalities, even physical appearances were different.”

Lindsey’s passion for the university only grew after discovering the College of Social Work (CoSW).

“I’ve always had a yearning to help people.”

After learning about what the college had to offer, Lindsey decided he could apply the tools his professors and advisors would give him toward anything he wanted to do in the future.

“I believe the foundations and values of the social work profession align with who I am and what I want to grow to become,” he explained. “I still credit this school to this day, as I gained more than a degree, but more so wisdom after seeing how welcoming and passionate the professors were to be creating an educational space from an inclusive mindset.”

As communities and individuals face continued threats of discrimination, marginalization and violence, the CoSW is resolved to uphold its long-standing commitment to core social work values and principles of social justice.

Students in the program gain the knowledge and skills needed for careers in social work and social justice, with curriculum spanning advocacy, crisis intervention, social policies and more. The program offers a unique lens through which to view individuals, families, communities and society at large.

In 2014, Lindsey graduated from UK and entered the workforce equipped with a social work degree, a better understanding of inclusivity and the determination needed to be a catalyst for change.

“UK exposed me to new groups of people who came from different places that I had never understood before, and they (on the contrary) didn’t understand where I came from,” he said. “At the time, I didn’t know that some of these early moments of adversity would lead up to the creation of Siimee.”

In the years following graduation, Lindsey aspired to work for companies where he could make the most impact, and he would eventually land his “dream job” as a recruiter for Facebook.

But it wasn’t long before Lindsey realized he needed to create a solution to a much bigger problem.

In fact, it was his time at the company that led him to co-found his startup, Siimee (pronounced “see me”). The app helps job candidates connect with recruiters by prioritizing inclusivity and mitigating bias. It lets people create profiles where they can openly discuss their identities and ambitions.

The purpose is to educate employers and job seekers about the biases that often occur in the hiring process and workplace.

“I founded Siimee in December 2020 after personally witnessing numerous instances of bias in my roles working at major tech corporations,” Lindsey explained. “It’s the several situations I’d witnessed that remind me why I started Siimee — it is my driver to establish a fair, unbiased hiring process.”

Research suggests that 75% of all resumes submitted through applicant tracking systems (ATS) are never even seen by human eyes. Lindsey hopes to lower — or eliminate — that staggering statistic.

While the app hasn’t launched just yet, it has received more than $300,000 in funding. And Lindsey’s efforts haven’t gone unnoticed.

He was recently named by Forbes to its “Next 1000,” which honors a list of inspiring entrepreneurs and small business leaders — many from diverse, underrepresented communities — who are redefining what it means to build and run a business.

Before launching Siimee, Lindsey spent time leading and collaborating with teams at Facebook, Tinder, Microsoft and The Walt Disney Company, sourcing and hiring talent in the tech and software development sectors.

“I created Siimee because I kept dealing with the same issues in my field of work,” he said. “If you do not feel empowered and seen at your workplace, know that a better opportunity is on your horizon.”

What does it mean to be a changemaker?

For Lindsey, it means championing for inclusivity. He often says, “inclusion is the connector between diversity and opportunity.”

Now, Lindsey is encouraging current students and fellow graduates to take advantage of opportunities to be the change they want to see in the world.

“Recognize your talents, figure out what drives you, then own it,” he said. “You may sometimes feel like you’re not impacting your field but give it time. You’ll look back years from now and be pleasantly surprised by your capabilities.”