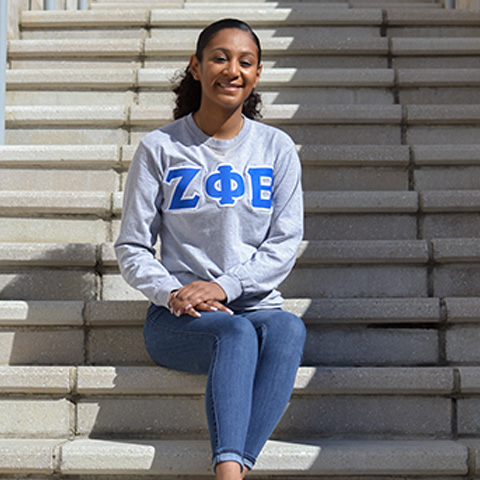 Anna Villarreal, who started as a finance and economics major at the University of Kentucky, realized three years into her program that she wanted to shift gears.

Choosing finance and economics was her way of meeting that requirement. But Villarreal knew she wanted to be able to help others. The only way she saw that happening with her current major was by making enough money to give back to those in need.

During her time as a finance and economics major, Villarreal met a sorority sister who was majoring in social work and introduced her to the program. Recognizing this as a chance to make an impact, Villarreal took a leap of faith and switched her career path to social work.

“Switching majors was the hardest thing I had to do. I was beating myself up over it; I thought I wasn’t smart, I didn’t think I could do it,” she said.

Initially, she started in the Latina Student Union and later became president of the student organization. However, she soon found herself in Zeta Phi Beta, Incorporated — a historically black sorority on campus.

“Zeta caters to black communities because it is a marginalized community. We focus on service projects for the community, and we also do programming here on campus for black students,” Villarreal explained. “We exist solely to help give back to our communities because the majority of these organizations were founded on historically black campuses.”

As one of seven historically African American fraternities and sororities on campus, Villarreal works hard to make sure the work the Zeta’s are doing stands out.

Villarreal created a mentorship program before joining the Zeta’s and used her position within the sorority to expand it. Villarreal also worked on the Social Justice series, an ongoing project she had a hand in initiating.

“This semester is going to be about financial literacy and how it correlates to generational wealth within black communities, Villarreal said. “Another one is representation in positions of power, so like lawyers, doctors and judges.”

In addition, Villarreal is passionate about engagement and tries to stay knowledgeable about current issues by attending meetings for a handful of student organizations, including her sorority, Black Student Union, Minority Business Professionals, National Association for the Advancement of Colored People, Muslim Student Association and the Indian Student Association.

“Considering my passions and who I am as an individual, the field of social work fits me perfectly. Social work utilizes my skills and talents while creating a welcoming environment that has given me the resources to succeed academically and professionally.”

With graduation on the horizon, Villarreal is ready to join the workforce. Through the Public Child Welfare Certification Program, Villarreal has been able to gain invaluable experience.

And after walking across the stage at Rupp Arena on December 20, Villarreal gets to step into her first job with one of the KY’s Children and Family Services local offices.

“Since I wanted to do something with legislation, I thought child welfare would be a good fit since it deals a lot of policy, but it’s also job security,” Villarreal said. “They are literally training us how to get these jobs. It’s a great partnership with the cabinet and social work program. I don’t have to worry about where I’m going to go after graduation.”

Villarreal plans to continue her education and pursue a master’s degree in social work. The road doesn’t stop there, though. Villarreal also has hopes to maybe one day get a law degree. Fitting in with her ambitious personality, her goal is to enact change in the child welfare system through policy ad reform in legislation.

Her advice to fellow students is simple: don’t give up.

“I would tell them that it’s going to get hard, you’re going to be tired, you’re going to wanna give up. But hard work yields success, and without success, you can’t make an impact,” Villarreal said. “So, push through, keep pushing through, because it will all pay off.”