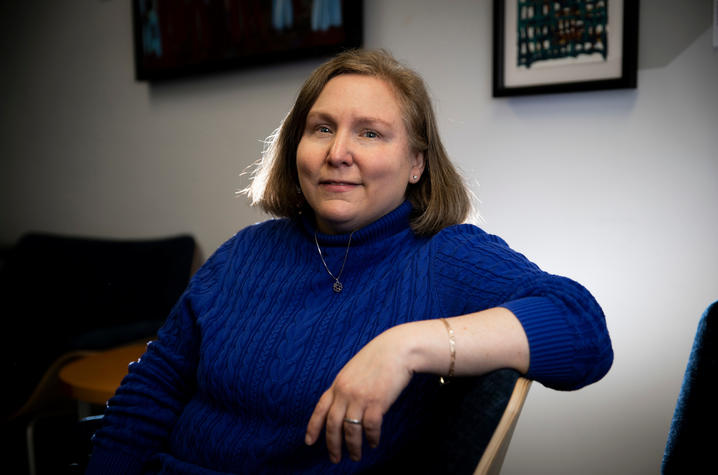 UK College of Social Work recently spoke with Julie Cerel, PhD, Director of the Suicide Prevention & Exposure Lab, about the work her lab is doing to prevent suicide and help raise awareness and support for those impacted. The conversation that follows has been lightly edited for length and clarity.

Dr. Cerel, would you share with us how the UK College of Social Work Suicide Prevention and Exposure Lab (SPEL) and your research has developed over the last few years since it was founded?

The lab is the place where all the suicide research from our college is housed. We have a wide variety of ongoing projects that have suicide as the focus, either in terms of prevention, training clinicians, or suicide exposure–which is knowing someone who has attempted or died by suicide.

We use the word exposure instead of bereaved because we recognize that there are a wide range of people who are exposed every time someone attempts or dies by suicide. And we just don’t have the research to figure out who’s going to have the most impact, and that’s very much part of our focus. When I first started doing this, there was this notion that people’s suicide grief probably isn’t different than other grief. And what we found is that it is different, and exposure plays a role.

Much of SPEL’s research focuses not just on the individual but also the collective—friends, family, colleagues and other connections affected by suicide and loss. What has been most impactful for supporting those individuals and raising awareness, especially around mental health?

We need to figure out better ways to keep people alive and not have them die by suicide. A large part of what we do is research recommendations to prevent suicide. Another is raising awareness that it’s not just a handful of people who are exposed. Across communities there are going to be a lot more people impacted. Understanding who could be exposed and putting policies in place for support when there is a suicide is how we can best help.

When you think about the impact in terms of exposure, across multiple studies done across multiple countries, at least half of us know someone that’s died by suicide. When you ask about attempts, that number goes up to about 70% of us. Knowing someone has an impact and people who have been exposed to suicide are themselves at slightly greater risk of their own suicidal behavior.

When I first started doing this, it was also said that for everyone that dies by suicide six people are left behind and intuitively, anyone that’s ever lost anyone to suicide knows that that’s not the case, it’s a lot more. We started asking the question if it’s not six, what is it? And so that line of research here at the UK College of Social Work led to us being able to calculate, at least with one of our studies, that for everyone who died by suicide, 135 people were exposed.

This year, suicide has again become front-page news as we have lost many high-profile individuals to this tragedy. But we know suicide affects families regardless of wealth, age, gender or race and even country. How does the research being done at (SPEL) give a voice to different communities and help policy leaders and health professionals make informed decisions about prevention and support for those affected by suicide?

That’s partially why I do the work I do. We know that family members probably will have high impact, but it’s also people who perceive themselves to be close or similar in some way to the person that dies by suicide or people who have had previous exposure to suicide. Then, even if it’s somebody who’s not close to them or a celebrity, it can also be a trigger. Someone might think “Oh, my friend died in the same way and maybe this is an option for me.” It can make it more cognitively available for people, unfortunately, despite the shock, grief, or trauma that they have experienced.

Right now, we are working on a number of projects. We have one that’s with the Kentucky Army National Guard, which is funded by the Military Suicide Research Consortium, and is looking at suicide exposure because we really want a better understanding of how leadership can help when there’s a suicide within a certain unit or in a certain group in the Guard. We are also surveying army helping professionals with the collaboration of our program at Fort Sam Houston and focusing on the curriculum and what army social workers and other behavioral health and religious professionals need to better support suicidal soldiers and how suicides impact them.

What are some of the biggest misconceptions about suicide?

One is that talking about suicide will somehow put the idea into someone’s head. And there’s absolutely no evidence of it. It’s more often that people feel relieved if someone notices that something is wrong and asks the question, “Hey, you know, I’m so worried about you. Are you thinking about suicide or thinking about killing yourself?” That can really open the door for a person to get help.

Another is about language. We recommend addressing the manner of death as “died by suicide” instead of “committed suicide.” People commit a crime. Commit a sin. There is a stigma around the word commit that is harmful to the survivors and those who are exposed to the death.

Until the pandemic, suicide was among the top 10 causes of death in the US. More people died by suicide than by homicide. In some instances, like in Kentucky, it’s almost double the number of people that died by suicide than homicide. But we see so many homicides in the news that it is not always obvious how many people we lose to suicide. Half of firearm deaths in the US are suicides. When we discuss gun violence, it’s not just homicide we should be considering as the issue. Suicide and guns are unfortunately very linked in this country.

We’ve just come through a global pandemic which had far-reaching implications in terms of financial security, isolation and overall health. How do you think this will impact the conversation around suicide prevention, and is it a factor in your ongoing research?

Suicide rates had dropped in 2019, which was a very encouraging sign. When the pandemic hit in 2020, the early predictions were that suicide would go through the roof. And many of us who are in Suicidology did not think so, because we have seen that when there’s a crisis either within a country or region, people tend to band together. With COVID, what we saw is people were really looking after each other. There was this whole message of check on your friends and use the crisis numbers like 988.

Suicide rates really went down among youth and everyone else during the pandemic. And only when things started to open back up is when the numbers started to go up. Part of that might be a reporting issue. We don’t know, but we also can’t look at COVID in isolation. The world has been a scary place in a lot of other ways for people since the pandemic.

The UK-CAN project is supported by the Substance Abuse and Mental Health Services Administration (SAMHSA) of the U.S. Department of Health and Human Services (HHS) as part of an award totaling $101,879 with 0% financed with non-governmental sources. The contents are those of the author(s) and do not necessarily represent the official views of, nor an endorsement, by SAMHSA, HHS, or the U.S. Government. For more information, please visit samhsa.gov.

The University of Kentucky College of Social Work Suicide Prevention and Exposure Lab (SPEL) works to better understand how suicide impacts us personally and professionally and reduce this impact, understand how we can prevent suicide and disseminate this knowledge, and conduct basic research on factors contributing to suicide such as stigma, substance misuse, and socio-demographic variables If this is something of interest to you as a student or collaborator, please contact us and we will look for ways we can work together.