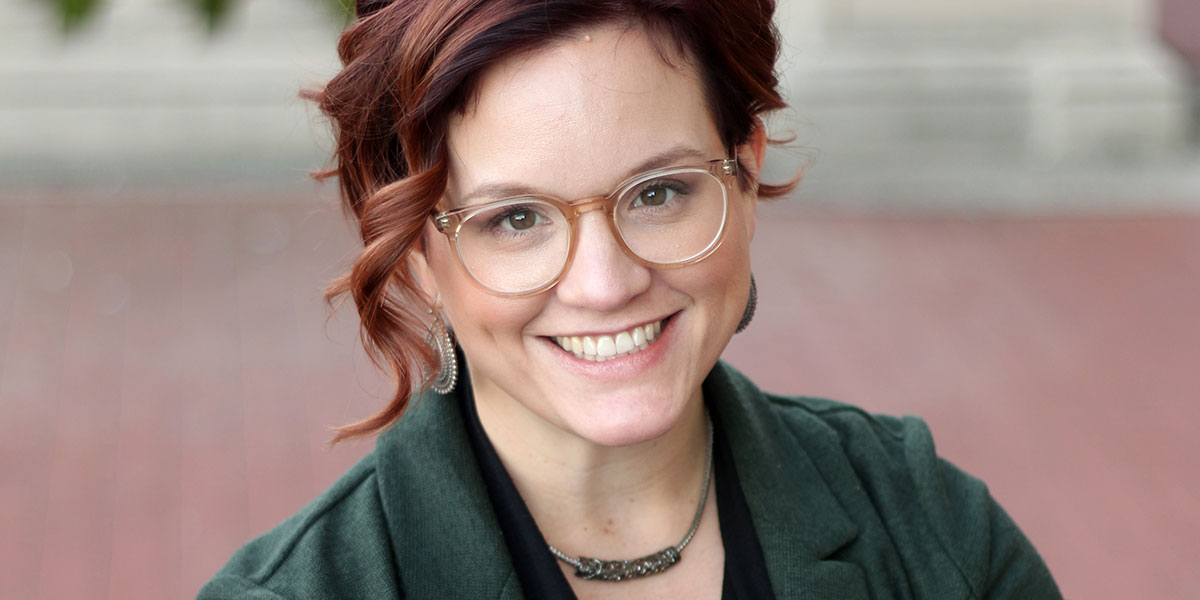 To say Elizabeth Trebelhorn is a force of nature is an understatement. Her passion for the social work field and desire to advocate for change radiates as she describes her professional path.

“During my childhood, my brother was in the juvenile justice system. Then he went into the adult system. That’s where my interest in this field of study came from. I was trying to understand how it could be so different, two people from the same household,” Trebelhorn said.

After earning a bachelor’s degree in Juvenile Justice and Adult Corrections from Eastern Kentucky University, Trebelhorn joined the Juvenile Justice Advisory Board for the State of Kentucky. There, she got her first glimpse of how the juvenile justice system works. “I thought ‘this is where I want to be in 40 years,’” Trebelhorn said, “My life goal is making this big level change.”

But first she needed to get to the “front lines.” Trebelhorn began working at a group home for children with histories of abuse, neglect, abandonment, and/or family trauma. She later worked at a juvenile detention facility, which she says inspired her to focus even more attention on racial disparities in incarceration.

After getting married and becoming a mother, Trebelhorn stepped back from her career pursuits and focused on running a household. As the children grew, Trebelhorn applied to the master’s in social work program at the University of Kentucky to continue her education.

In 2016, tragedy caused her to step back after her husband died by suicide. “I had two kids, so I had to leave the program,” Trebelhorn said. “I realized I could not give 100% to the work that I felt so passionately about. And when you’re passionate and you have to say I’m not the best person to push this forward right now, that was hard to do.”

It would be several years before she returned to her calling—at an inflection point in the U.S. over race and justice. “I went to the March on Frankfort Black Lives Matter protest and that put me back on fire,” she explained. “I said OK, it’s time to get back to work.”

Trebelhorn contemplated returning to her master’s studies, but thought she waited too long to go back to the classroom. A friend suggested trying the UK College of Social Work online Master of Social Work program. “I thought that dream was kind of dead, but the online program gave me the opportunity to come back in and finish my degree.”

As a student, Trebelhorn completed her field practicum at The Wanda J. Robinson Foundation. There, she helped to identify funding opportunities that would enable the foundation to further their mission—a contribution that would earn her a permanent position as the Director of Development.

“We’re really grateful for Elizabeth’s commitment, the passion that she brings with her, and her love for creating best practices that ensure diversity, equity, and inclusion policies that are family-centered,” Amy Snow, Director of the Wanda Joyce Robinson Foundation, said of Trebelhorn’s efforts.

For Trebelhorn, working with The Wanda J. Robinson Foundation is another step towards her goal of making a positive impact on individuals affected by the justice system. Co-founded in 2018 by Dale Robinson, a former prisoner turned successful business owner, The Wanda J. Robinson Foundation partners with schools, community agencies, and other non-profits to provide resources, services, and mentorship to prisoners and their families as part of a holistic approach to breaking the generational cycle of incarceration. It’s a big problem: 7.3 million youth in the U.S. have one or both parents incarcerated. Without effective intervention, 70% of these children are at risk of following their parent’s path into jail or prison.

In her new role, Trebelhorn, who graduated with her Master of Social Work degree in December 2022, will oversee a program that provides resources to strengthen and expand the commitment to end generational incarceration in Kentucky by working within the county jail to facilitate contact visitation, provide weekly video visitation and transportation assistance to facilities across the state.

“I’ve been a stay-at-home mom for years,” Trebelhorn said, “But now that I finished my masters, I can hit the ground running.”