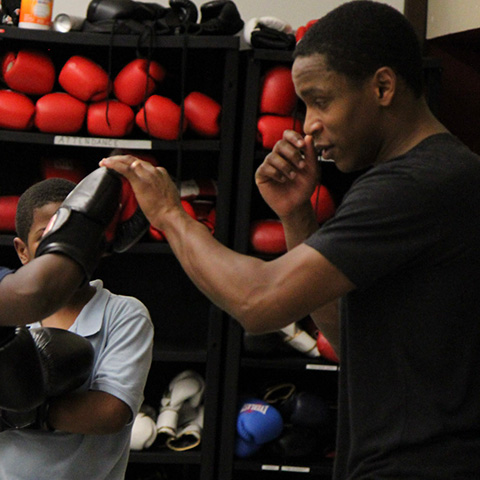 It’s a weeknight in Chicago. The city streets and sidewalks are crowded — filled with the hustle and bustle of people making their way home for the evening.

How do you define home?

For some, it’s a lavish penthouse with a spectacular view. For others, it’s a much smaller, overpriced apartment. But for hundreds of the city’s at-risk youth, the meaning of home is far less traditional.

In a boxing club on Homan Avenue is where these teens feel safe.

There’s a story behind every dodge, duck, bob and weave — a journey filled with more tribulations than triumphs. At the front of the class is a young man who’s attempting to take the fate of Chicago’s most vulnerable adolescents into his own hands.

He too has a story.

“There were times when the lights would be turned off,” Jamyle Cannon recalled. “To think, we were so poor we don’t deserve water or electricity — that’s an experience that stands out about my childhood.”

Cannon vividly remembers the challenges that came with growing up in a low-income neighborhood in Lexington. At a young age, he knew what it meant to struggle. Cannon often felt helpless as his family battled poverty and addiction. Those struggles made him question his place in this big world, and that uncertainty — about who he was and where he belonged — lead to angst.

“I definitely had anger issues.”

In every sense of the word, Cannon felt like he had to fight — for himself and his family. He refused to let unfairness and inequality knock him down. “Fighting is really a part of me. I knew how to behave in school and in front of adults, but I was fighting when I was away from those influences.”

Cannon followed his fists down a rocky road. At the age of 12, he had to undergo court ordered anger management classes after getting arrested for a fight.

But there was one person whose positive influence outweighed Cannon’s urge to fight for all the wrong reasons. “The spirit of the grind — the spirit of the hustle that my mom exhibited is a staple of my upbringing.”

Cannon’s mother single-handedly raised him and his three siblings. There were many days she would ride the bus with them to school, and when there wasn’t enough fare left for herself, she would walk to work. If that wasn’t tiring enough, Cannon’s mother would also walk to her college classes.

With each step, she was walking toward a new path — a life that would inspire her children to do more, to be more.

When Cannon was 14, his mother graduated from the University of Kentucky. And the lights were never turned off again.

“When she graduated with a degree in social work, I watched our lives change almost immediately,” he continued. “I wanted to follow in her footsteps, and I wanted to continue that upward trajectory.”