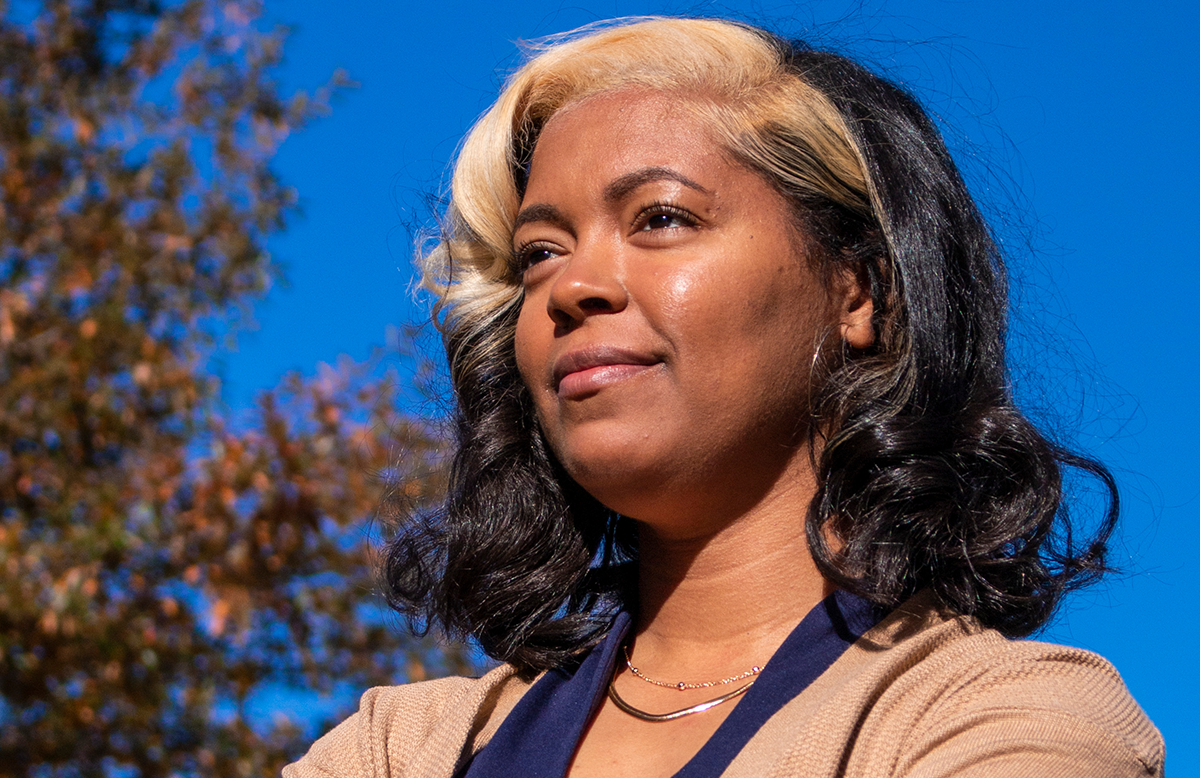 “Growing up, I was a child who fell through the gaps, and I realized if I had the supports that would have come from a social worker or someone in the helping field that my life wouldn’t have had as many roadblocks as it did,” said Kendra Mulder, UK CoSW Doctorate of Social Work student and recipient of the 2022 Lyman T. Johnson Torch Bearer Award.

“That’s what motivated me to become a social worker. I wanted to be able to reach back, help people ahead of time in a very proactive manner to help create avenues of success for them without them having to go through very unnecessary traumatic or tough experiences to get there.”

The Opportunity to Learn and Grow

The desire to be a force for good and positive change in the community was already on Mulder’s mind as she pursued her Bachelor of Science degree in Family Sciences at the University of Kentucky, graduating in 2013.

“I’m a first-generation college student so everything came new. I would be lying if I said it wasn’t hard in the beginning. I really ran into a lot of roadblocks,” Mulder said. “I’m definitely grateful for them because it taught me the value of resilience, the value of determination and not giving up.”

Mulder took time away before deciding to further her education. When she returned to pursue a master’s at the University of Kentucky College of Social Work, she found the impetus for her future career direction.

“As I went through that program, what I found is there are so many diverse ways social workers can be effective. I had no idea how amazing the field of social work was. When I finished my master’s, I got my clinical provisional licenses, and I also began working in the school system. I knew there was just more I wanted to do, because I realized there were a lot of gaps in services for people who were minorities,” Mulder said.

Mulder began her social work career as a foster care specialist and worked for the Department of Community-Based Services (DCBS) as a family social worker. In 2019, she accepted a position with Fayette County Public Schools as a mental health specialist. She now serves as a program manager for assessments and referrals for Fayette County School’s District Support Team.

Mulder also founded a therapeutic private practice in which she primarily serves Black and Hispanic clients who are experiencing adverse symptoms related to anxiety and depression. Her driving passion as a care worker is ensuring that people of color have access to affordable and culturally sensitive mental health services.

“I wanted people to be able to sit down with someone who looks like them and feel like it’s a safe place to not be judged and not feel like it is a power differential between the professional and the client. And I absolutely love what I do,” Mulder said. “Clients were coming from everywhere and I had clients all over the state. And what I realized is that the work I do as a Black social worker is so needed because I truly am sought out by so many people and that too is a part of what drives me to be my best self every day.”

“Mainly my focus is on Black women and that’s what motivated me now to come back and be a doctoral student, where I focus on cognitive approaches to the strong Black woman schema and mitigating the side effects that come along with that schema as well,” Mulder said of her decision to pursue a doctorate degree at the UK College of Social Work.

Mulder’s dedication to her community and demonstrated achievements in the field of social work both inside and outside the classroom make her uniquely qualified to receive the 2022 Lyman T. Johnson Torch Bearer Award.

“We are extremely proud of the work that Kendra has done – and will no doubt – continue to do,” said Jay Miller, Dean of the College of Social Work. “Her dedication to social work practice and commitment to positive change is the embodiment of this award.”

Mulder said she is grateful for the award and surprised by the recognition. “The work that I do every day is just who I am. It’s who I was created to be. I have never thought about really having accolades for doing what I love to do. For me it’s an honor, it’s a privilege, I don’t take it lightly,” Mulder said.

The Lyman T. Johnson Awards recognizes and celebrates African American alumni and students at the University of Kentucky who exemplify the passion and courage exhibited by Lyman T. Johnson, as he led the racial desegregation efforts as the first African American student to attend UK more than 60 years ago. Johnson went on to become a community civil rights advocate and leader on issues including pay equality, neighborhood integration, and equal educational opportunities.