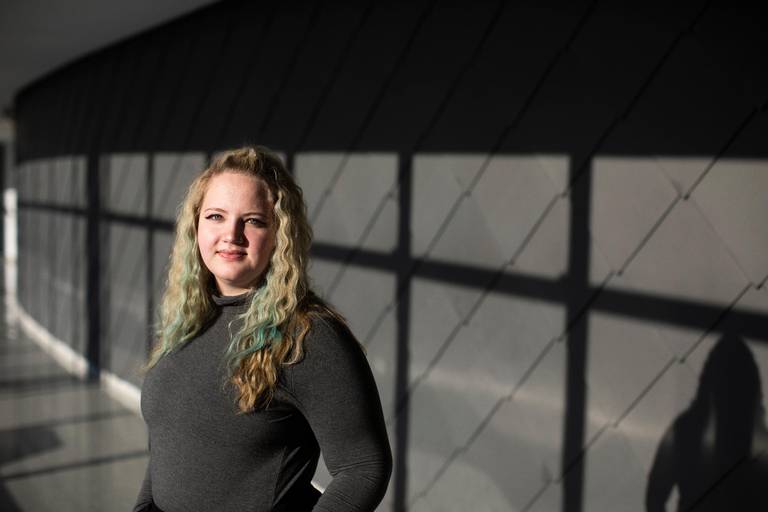 Success Against All Odds: From Aging Out of Foster Care to Social Work Grad

Can you recall a time when you felt the odds were stacked against you?

For Tamara Vest, “the odds were stacked against me” isn’t just a simple sentence to sum up an unfortunate situation. The 23-year-old has rarely been given a fair chance at succeeding.

And behind every success, she has a story filled with struggle.

“My childhood was rough, to say the least.”

As children, most of us believe in fairy tales. But Vest didn’t have a storybook upbringing. At 9 years old, reality set in when her father lost his fight with cancer.

“I had to be carried out of the funeral home, because I refused to leave. It’s always something I struggle with,” Vest said. “It hurt me when I was a child. But I never really completely understood the loss until I was older.”

The loss was immense, since he was the primary caregiver. Meanwhile, Vest’s mother was facing a battle of her own. Unable to escape the relentless grip of substance misuse, she couldn’t care for Vest.

Eventually, her older brother was awarded custody. Due to the tumultuous nature of his household, Vest found herself wishing she had been placed anywhere but there.

“It was the most traumatic experience of my life. Going through just about every kind of abuse you could imagine as a young child and teenager was extremely hard,” she said. “Even though they were my kin, I felt unwanted and unwelcome. I hated to go home, and school was an escape.”

But with the ring of every afternoon bell, Vest was transported back to reality.

“I was scared to speak up in fear that it might make the situation worse, or that I would end up in foster care — ironically.”

Eventually, Vest began to confide in school counselors about the ongoing mental and physical abuse. Around the same time, she returned home from school one afternoon to be nonchalantly told to pack her bags.

“I was 16, and my brother decided he didn’t want to take care of me anymore, so he took me to a homeless shelter.”

Vest spent the next two months at Arbor Youth Services, a shelter for children and teens, before being placed in a foster home.

At the time of her placement, a social worker told Vest there was only one home in Lexington fostering teenagers — bringing into focus an issue that is rarely addressed. “It seemed there was a lack of wanting to foster children over a certain age.”

Vest stayed in the foster home just shy of one year.

Vest was tired of being used.

So, at 17, she decided to take part in a program that provided an apartment. By definition, Vest was still a child, but she learned to embrace a new lifestyle — one that required confidence and independence.

Vest received assistance with paying rent and was given a grocery stipend. The only caveat — she either had to be in school full time, working full time or be part time for both.

“It was hard, because I didn’t have any support. I literally had to teach myself how to cook. I also was never able to obtain my permit or driver’s license,” Vest continued. “I faced challenges in being able to advocate for my needs and meet my needs.”

Once she turned 18, Vest had the option of leaving foster care or recommitting until she was 21. Fed up with “being in the system,” she decided to embark on a new journey.

Determined to better her future, Vest began her college career at Bluegrass Community and Technical College — pursuing a degree in political science. However, she soon realized the passion just wasn’t there.

“During my time off, I reflected. I thought about the people who brought about positive change in my life — they were social workers. So, I decided to start there.”

Vest returned to BCTC and earned her associate’s degree with a focus in social work.

In 2018, she transferred to the College of Social Work (CoSW) at the University of Kentucky — shattering every statistic that told her she would be unable to pursue higher education.

Vest felt more prepared than ever to earn a bachelor’s degree. But continuing her education wasn’t without challenges.

“The staff in the college were extremely supportive,” she said. “It was finally an environment where I felt worthy and accepted.”

Vest credits faculty members Kalea Benner and Diane Loeffler and Dean Jay Miller for being incredible resources. “I believe the flexibility and support of these individuals helped me recognize the strengths within myself to succeed in my undergraduate journey.”

“Tamara’s perseverance is a testimony to her grit and determination to ensure she can help others create positive change,” Benner said. “Using the very factors that challenged her as motivation to make sure others are positioned to succeed, truly reflects the values of the social work profession. Tamara manifests the Wildcat spirit in all that she does.”

And in that spirit, Vest wondered how she could help others achieve success.

During her time at UK, she was introduced to Voices of the Commonwealth (VOC) — an organization that advocates for foster youth. Vest was asked if she would be interested in telling her story and, emphatically, said yes.

But her work with VOC became more than just telling her story. Vest soon found herself doing work she at one time swore she would never get involved in — foster care and child welfare.

“I learned very quickly that my experience is vital to creating change for that population.”

As Vest prepares to graduate, 2020 has been a painful reminder that life doesn’t always go according to plan.

“As a former foster youth with no support, I relied on my income to support myself. However, my job closed during the first months of the pandemic and unemployment resources were hardly enough to cover food — let alone my rent,” she said. “I still fear that everything I’ve worked for could be taken away from me in a matter of seconds.”

But Vest also knows the power of perseverance.

Less than 10% of foster youth graduate from college, and she will be one of them. Additionally, Vest was chosen as the December Commencement student speaker.

“There were times in my life when I didn’t believe that I would even reach the age of 18. So here I am at age 23, receiving a bachelor’s degree, and it is beyond surreal.”

But Vest’s journey at UK is far from over. This spring, she will be pursuing a master’s degree, while working at a private foster care agency.

Vest values her education, but she is also eager to channel her passion into purpose by helping foster teens who feel overlooked and underestimated beat the odds.

“I’m an example of someone who came from nothing and made everything for myself. It is a long process, it is a hard process, but the results are so worth it. Investing in yourself and your future is never something you will regret.”

See this story in Herald-Leader. Vest’s journey is also mentioned by WTVQ here.