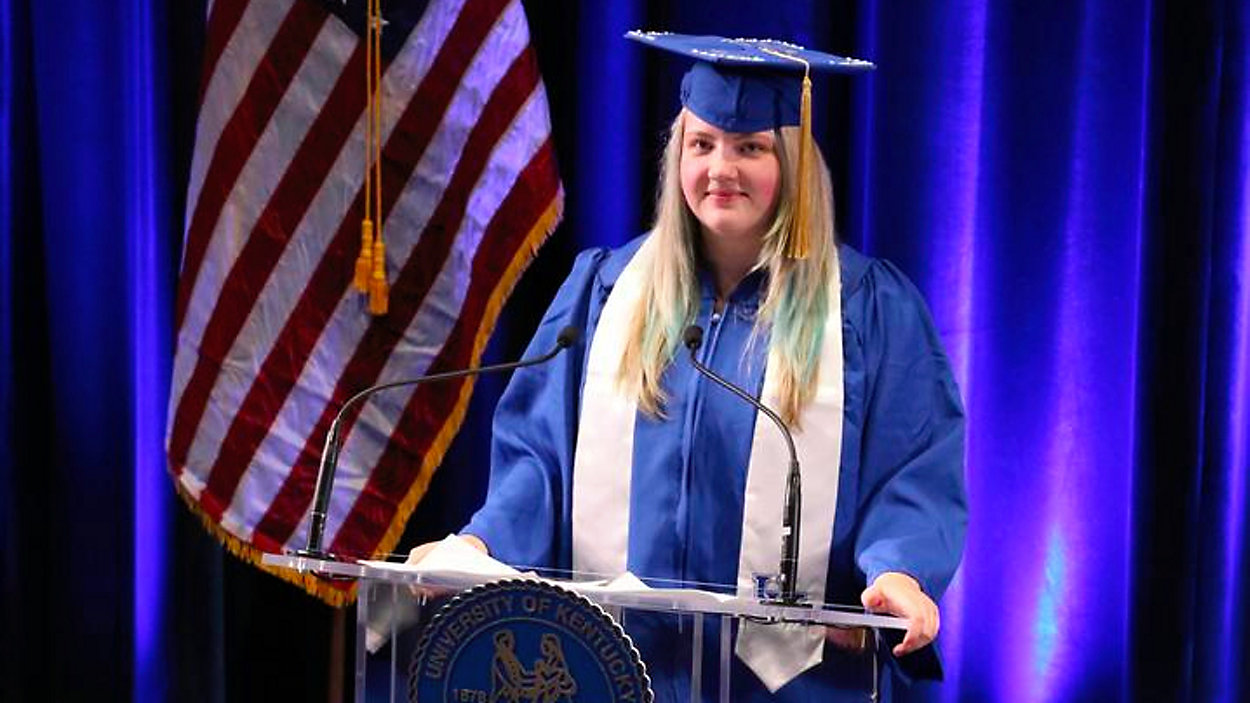 This article was originally published by Spectrum News 1.

Adversity is a word with which Tamara Vest is all too familiar.

Vest, 25, a Lexington native, aged out of Kentucky’s foster care system when she was 17. She describes her childhood as “rough” and said “the odds were stacked against” her.

University of Kentucky public relations officer Lindsey Piercy has been writing about Vest and following her story for several years. Piercy reported that Vest was 9 years old when her father died of cancer. Vest said she remembers being carried out of the funeral home because she refused to leave. Her mother could not care for her because of an ongoing battle with drug addiction.

“It’s always something I struggle with,” she said. “It hurt me when I was a child. But I never really completely understood the loss until I was older.”

After multiple lengthy court proceedings, Vest was placed in the care of her older brother. She described his household as “tumultuous” and recalls wishing she had been placed somewhere else.

“Going through just about every kind of abuse you could imagine as a young child and teenager was extremely hard,” she said. “Even though they were my kin, I felt unwanted and unwelcome. I hated to go home, and school was an escape. I was scared to speak up in fear that it might make the situation worse, or that I would end up in foster care — ironically.”

Vest eventually informed the counselors at her school about the prolonged mental and physical abuse she had been enduring. She was 16 years old when she came home after school and was told to gather her belongings. After doing so, her brother took her to a homeless shelter.

“My brother decided he didn’t want to take care of me anymore,” she said.

She spent two months living at Arbor Youth Services before being placed in a foster home. A social worker told Vest about the only home in Lexington that fostered teenagers.

After living in the foster home for nearly a year, Vest said she was tired of being used. She was 17 years old when she signed up for a program that provided an apartment. While technically still a child, she said she embraced her new lifestyle. Doing so, instilled in her confidence and independence. She received rental assistance and a grocery stipend on the conditions she attend school full time, work full time, or do both part time.

“It was hard, because I didn’t have any support. I had to teach myself how to cook. I also could never get my permit or driver’s license,” she said. “I faced challenges in being able to advocate for my needs and meet my needs.”

After being “fed up with the system,” she said, Vest chose to not recommit to foster care and began a new path by enrolling at Bluegrass Community and Technical College (BCTC) to pursue a degree in political science. Her pursuit of that degree soon changed.

“During my time off, I reflected,” she said. “I thought about the people who brought about positive change in my life — they were social workers. So, I started there.”

THE PATH TOWARD SOCIAL WORK BEGINS

Vest earned her associate degree with a focus on social work from BCTC and in 2018 transferred to the University of Kentucky College of Social Work to continue her education, which is a statistical anomaly for someone with her past, as fewer than 10% of foster youth graduate from college. There were challenges, however, and Vest said UK faculty members Kalea Benner, Diane Loeffler and UK College of Social Work Dean Justin “Jay” Miller helped her by being “extremely supportive” and making her feel “worthy and accepted.”

“I believe the flexibility and support of these individuals helped me recognize the strengths within myself to succeed in my undergraduate journey,” Vest said.

During her time at UK, Vest was introduced to Voices of the Commonwealth (VOC) — an organization that advocates for foster youth. Vest agreed to share her story, but soon did work she previously swore she would never get involved in — foster care and child welfare.

“I learned quickly that my experience is vital to creating change for that population,” she said. “As a former foster youth with no support, I relied on my income to support myself. However, my job closed during the first months of the pandemic and unemployment resources were hardly enough to cover food — let alone my rent. As I prepared to graduate, I still feared that everything I’ve worked for could be taken away from me in a matter of seconds.”

Vest was selected as the December 2020 commencement student speaker. She said sometimes in her life when she believed she would not reach the age of 18, and earning her bachelor’s degree at age 23 was “beyond surreal.”

LIFE AS A SOCIAL WORKER BEGINS

Vest has worked as the Independent Living Coordinator at Murray State University since October 2021 and she is on track to graduate from UK in a year with her master’s degree in social work. She said her passion is helping teenagers in foster care beat the odds and not feel overlooked or underestimated.

“I’m an example of someone who came from nothing and made everything for myself,” she said. “It is a long process. It is a hard process, but the results are so worth it. Investing in yourself and your future is never something you will regret.”

There are more than 9,000 foster youths in Kentucky and finding stable homes for placements has become increasingly challenging as social services struggle with an increased number of caseloads, smaller staffs and thinner budgets. The rate of child abuse and neglect in Kentucky remains high. The COVID-19 pandemic had a more significant effect on vulnerable populations, such as the child welfare sector.

Vest worked with several social workers while growing up in foster care and she said those interactions were positive and negative.

“I can speak to the feeling of being burned out and not having enough pay, and just being so stressed,” she said. “I think now that I’ve seen it from an outside perspective, I have been able to understand probably why some interactions I had were negative, but there’s no excuse.”

“One of the social workers I interacted with was a therapist, another was a clinician and one worked in schools,” she said. “Obviously, there were others that worked as case managers and things like that. It was just a variety of ways you could help people. As a young adult, I realized that coming out of the foster care system and not having support sets you back. I have to work twice as hard to get where others are. I just wanted to help people that were in the same situation as me and may be set back a little.”

Vest said she realizes foster care youth is not the only group that suffers setbacks.

“It could be any population that feels that way or just anyone who just feels like they need a little help to match where other starting lines are. That’s what led me to do social work. I never thought that I would be a social worker. When I left foster care, I said, ‘I want nothing to do with any of that stuff ever again.’ Now, here I am.”

In response to problems plaguing foster care youth in Kentucky, the UK College of Social Work is using $3.9 million in COVID-19 relief funds to launch the Pandemic Support Response Initiative (PSRI), which aims to serve as a resource connector for foster youths across the Commonwealth. The initiative is geared toward foster youth not unlike Vest once was — those dealing with financial hardships, employment issues, and access to mental health and wellness resources. While there is an array of services and resources designed to assist youth in foster care as they work toward self-sufficiency, PSRI would increase the ability to access support, which is limited.

“PRSI will support current and former foster youth by connecting them with resources to develop and attain employment skills, sustainable housing and mental and behavioral health services,” according to a press release from UK. “One aspect of the program is a peer-run call center that offers callers a real-time, one-on-one consultation for young people seeking to access needed resources.”

Dean Miller said PSRI is one way the college intends to ease some of the burden the pandemic has put on foster youth across Kentucky.

“Veritably, COVID-19 has negatively affected us all,” he said. “But, foster youth and alumni have been particularly affected. This initiative will connect young people with the resources and information they so desperately need.”

Vest said PRSI will help distribute more resources for children in foster care, which has been a statewide problem in Kentucky.

“When there are so many rural areas and just a couple big cities, and just with Kentucky being a long state geographically, it’s very hard to get resources distributed,” she said. “I think it’s great that the university is taking on the initiative for that. Overall, UK has always kept my former population in mind, and I think that’s great.”

Vest said when she first became a social worker, she did not know what she wanted to do. What she knew, however, was that she wanted to give back in some way. She said she never thought she would do macro work, which addresses large-scale systemic issues affecting large groups of people, but she did.

Shortly before graduating with her bachelor’s degree, Vest wrote what became Senate Bill 8, an all-inclusive bill addressing many needs pertaining to the child welfare system, specifically a change to Kentucky’s current extended foster care policy and amendments to the foster youth bill of rights.

“You don’t have to have a master’s to influence policy, you just kind of got to get in there sometimes,” she said. “Having a master’s is very helpful. I think it gives you more education on how to navigate the political arena and advocacy.”

Her plan is to continue on her current career path, but she admitted she would one day like to work for a lobbying organization, or be elected to a political office.

“We’ll see if that happens,” she said. “I’ve been following a lot of our leaders in both parties and reading a lot of their biographies to find out how they got to where they are politically. I’m taking notes from everyone and kind of paving my path.”