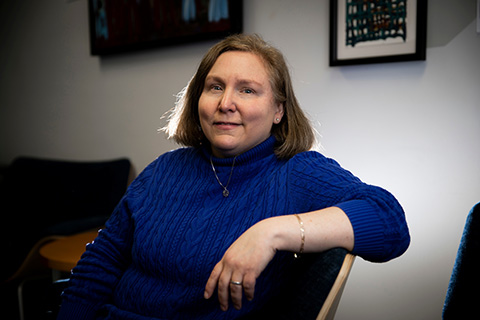 LEXINGTON, Ky. (Oct. 16, 2019) — It’s a staggering statistic — nearly half of Americans report they know someone who has died by suicide. Every one of these deaths leaves an estimated 135 people behind.

The grief process is always difficult, but a loss by suicide is like no other. And when the person who dies is someone you work with, especially in a tight knit community — like the military — it can have a lasting impact.

“As we continue to lose members of the military to suicide, it is very important to understand how these suicides impact the people working with them,” Julie Cerel, a professor and licensed psychologist in the UK College of Social Work (CoSW), said.

Cerel has been awarded a $1.1 million grant, over the next two years, to research the impact of exposure to suicide. The study, funded by the Military Suicide Research Consortium, will include surveys and interviews of personnel in the Kentucky Army National Guard. The study will also focus on people military-wide who are more likely to have occupational exposure, such as social workers, casualty assistance officers and chaplains.

In 2018, 541 service members died by suicide. Members of the National Guard accounted for 135 of those deaths. That’s compared to 133 in 2017 and 122 in 2016. The suicide rates in the National Guard are on the rise while the rest of the military is seeing a stabilization.

Cerel noted the Department of Defense has recognized the continued increase and the need for novel research to better understand how to prevent suicide and help those left behind. “This is a unique opportunity to collaborate with the Kentucky Army National Guard,” she explained. “We want to understand how suicides have an impact on our citizen soldiers and to help them in dealing with the increase.”

Cerel’s goal — along with the CoSW — is to determine how to best help those suffering from suicide loss and use the findings to implement the necessary training.

In recent years, the CoSW has undertaken numerous military behavioral health (MBH) initiatives. On Oct. 1, the college launched the Military Behavioral Health Lab, which aims to address mental health and wellness issues that affect active-duty, reserve and veteran military populations and their families.

“It is very important that the CoSW, specifically, and the university, more broadly, continue to examine issues related to suicide,” Jay Miller, dean of CoSW, said. “We hope that our strategic visioning and partnerships will contribute to a deeper understanding of how to best serve those impacted by suicide.”

Cerel’s project will also benefit from the special partnership between the CoSW and the Army Master of Science program at Fort Sam Houston.