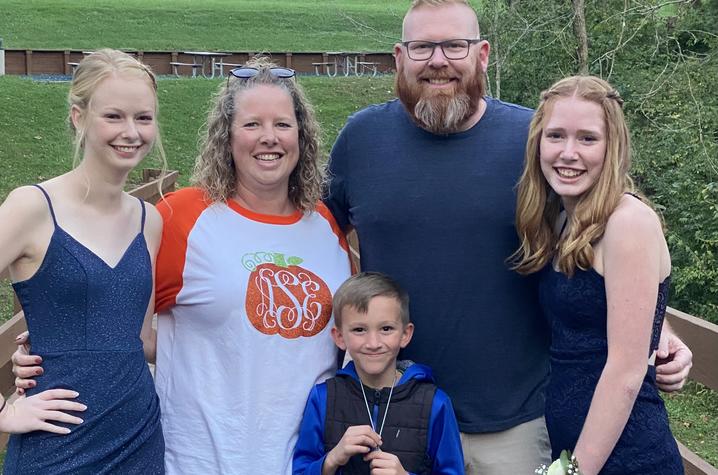 Most adoptive and foster parents will tell you, deciding to bring a child into your home is not a job — it’s a calling.

For Chris and Amy Schroder that call came unexpectedly. But they didn’t hesitate to answer.

“There was a young man in the school system where I work as a registered nurse, and they were having a hard time finding placement for him,” Amy said. “I came home, spoke to my husband and daughters, and we started classes soon after to foster this young man.”

However, during the process, he was adopted by another family.

The young man they were going to welcome into their home had found his own, but the Schroders knew there were other children in need.

“We continued with the classes. Our goal was to foster and have kids in and out of our home in hopes of reuniting them with their biological family — we had no plans to adopt,” Chris said.

In the spring of 2019, the Schroders became certified. They received several placement calls, but for reasons out of their control, they never came to fruition.

“We received a placement call for a 6-year-old boy. We accepted the placement, but a couple of days passed,” Amy continued. “Then, I got the call from this child’s social worker stating she would be bringing the child to us the next day.”

But the plan was never for him to stay. In fact, he was to be reunified with his biological father in just three short months.

“We worked that plan — until it changed, and he became eligible for adoption,” Chris said. “We had a family discussion, and we all agreed he was going to be a permanent member of our family.”

Though they were ecstatic about their growing family, adopting a child comes with a unique set of challenges.

“Parenting our biological children and parenting a child with trauma does not look the same,” Amy explained. “It was challenging to have a child who had been disrupted not once, but several times in a six-month period. It became the norm for him to have disruptive behaviors, then tell us he wants a new home.”

When looking for somewhere to turn, the Schroders were directed to Adoption Support for Kentucky – Virtual Interaction Program (ASK-VIP).

“I wanted to join to be able to meet other foster parents and make connections with people who were ‘in our boat,’ that sometimes felt like it was sinking fast,” Chris said.

Research shows that adoptive parents are often faced with burdensome legal processes, complicated youth histories and feelings of isolation. COVID-19 has made those challenges even more complex.

ASK-VIP, which launched as a pilot program in the College of Social Work (CoSW) at the University of Kentucky in 2018, is a virtual service initiative that connects and supports adoptive parents across Kentucky. The online discussions are a safe space for caregivers to share their experiences without fear of judgment.  Additionally, the program offers specialized training provided by a peer facilitator, who is also an adoptive parent.

“ASK-VIP was a lifesaver to be able to connect with people who were ‘in the trenches with us,’ and who had lots of words of wisdom,” Amy said.

“We would have never stuck with it or survived, had it not been for the ASK-VIP support groups,” Amy said. “They were small and very easy to connect to people you had never met before but felt like instant friends that you could call on day or night.”

The Schroders have the family they’ve always dreamed of. And they also have another family of sorts. They have been utilizing ASK-VIP for more than two years, and now, they want fellow caregivers to know they are not alone in their struggles, and there is help available.

“I absolutely would recommend ASK-VIP. I would tell parents — your biggest supporters are right in your neighborhood,” the Schroders said. “These groups bring those people to your attention, so you can reach out in a time of need.”

To learn more about ASK-VIP, you can contact Karen Bowman.