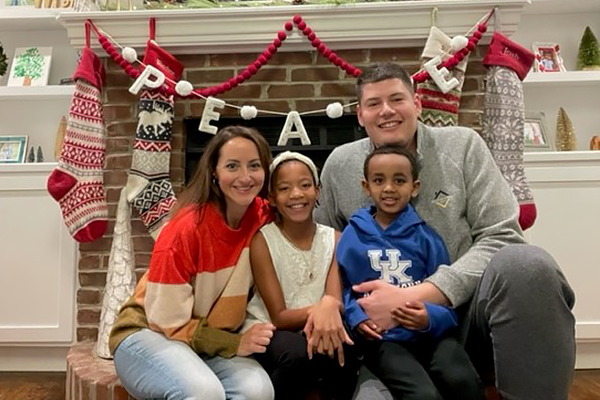 This article was originally published on UKNow.

How do you define family?

Just reading or saying the word brings up different meanings and various emotions.

The textbook definition says family is a group of people who are biologically related living together under one roof.  But often, people believe a family can be anything that involves love.

For Lauren Lynch, starting a family was the moment she dreamed about, envisioned and planned for.

But as the agonizing saying goes, “life doesn’t always go according to plan.”

“We had some fertility struggles,” Lynch said.

Lynch and her husband Josh — who was adopted by his grandparents when he was two-years-old — decided to take a leap of faith.

“We both have an immense belief in God, and it just felt right that adoption was the way we were supposed to build our family,” Lynch said.

Every adoption story is unique. It can be an exciting experience, but also an emotional one. While they never doubted their decision to pursue a domestic adoption, the process wasn’t without its challenges.

“Initially, there is a flurry of activity — a large amount of paperwork to tackle.” Once that is complete, all that is left to do is wait,” Lynch explained.

Waiting was accompanied by worrying.

As the days and weeks seemed to grow longer, Lynch recalls moments of uncertainty. “In the beginning, there is so much going on, then it slows to a halt. We had to exercise patience,” she said. “I couldn’t help but feel anxious about when it would happen.”

Eventually, it did happen.

Lauren and Josh were in the delivery room in 2013 when their daughter entered the world.

Five years later, their family would grow by one more through adoption. In 2018, they became a family of four with the addition of their son.

“I love being a mom to my kids,” Lynch said. “They are amazing and so wonderfully different from one another, and they make every day an adventure — even the hard days.”

When Lynch made the decision to pursue adoption, her personal and professional lives intertwined in a meaningful way.

As the Adoption Support Kentucky (ASK) coordinator in the College of Social Work (CoSW) at the University of Kentucky, Lynch knows all too well, adoptive parents are often faced with burdensome legal processes, complicated youth histories and feelings of isolation.

ASK is an award-winning program that has been serving foster and adoptive parents for nearly two decades through adept peer-led support groups. The in-person and virtual discussions are a safe space for caregivers throughout the Commonwealth to share their experiences without fear of judgment. Additionally, the programing offers specialized training provided by a peer facilitator, who is also an adoptive parent.

For many, including Lynch, access to these support services is vital.

“When you are part of an adoptive family, there are a lot of hard conversations that are necessary for your children’s physical, mental and emotional well-being. We are also a transracial adoptive family, which adds a layer of complexity,” she said. “Josh and I are continuously seeking resources to help with these conversations, as well as other people to support our family. Making sure we are intentional about celebrating our differences and encouraging diversity in our lives — and our children’s lives — is very important.”

For the Lynch family, the adoptions were finalized years ago. But being adoptive parents is a continuous journey that comes with ups and downs.

Lynch feels grateful to have a second family through the college — a support system to lean on and learn from.

“There is something incredibly vital to knowing another family who has a similar dynamic to your own,” she said. “The care and support you may offer one another is just something your own family and non-adoptive parent friends cannot, because they don’t have the same lived experience. ASK support groups and trainings provide adoptive parents with a place to find and make those important connections.”

How do you define family?

“I have worked hard to develop skills I didn’t formerly have. I have spent time thinking about my children’s future and how I, as a white mother, prepare them. I have had to give myself and others grace, but also learn when to speak up and advocate for my children. I have had difficult conversations with people I love and even had to reassess those in our lives,” she said. “But I can say with full confidence — being an adoptive parent has been the biggest privilege of my life. It has made me a better person, a lifelong learner and encouraged me to be the very best version of myself, so I can give my children the best experience.”