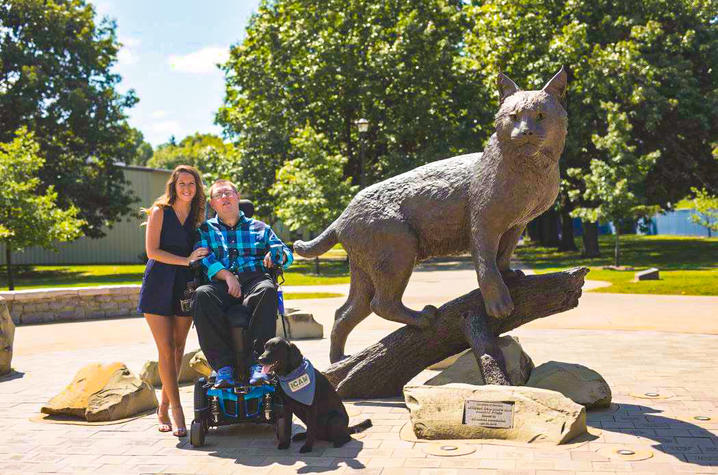 Everything can change in a moment.

It sounds like a cliché. But experiences, good and bad, have the power to fundamentally alter us — challenge our beliefs and influence our behaviors.

Can you pinpoint a “life-defining moment” — an experience that changed your life trajectory?

“I replay it in my head often,” she said.

It was February 2010, and Marissa’s brother — a seemingly healthy 16-year-old — woke up unable to move. After being rushed to the hospital, he received an incomprehensible diagnosis.

“Kevin went from a three-sport athlete to dying from a rare, inoperable brain cancer — specifically Pontine Glioma,” Massey explained. “I was 13-years-old at the time, and a social worker helped my parents tell me what was happening and explained Kevin’s prognosis.”

The prognosis was bleak. Kevin was given just nine months to live.

Then, he took a turn for the worst — suffering from a brain hemorrhage that doctors believed would claim his life in less than 24 hours.

This is where the Massey family and the University of Kentucky community become intertwined.

He was a Wildcat superfan with a dream to play Kentucky basketball. News of his condition began to spread far and wide among the Big Blue Nation.

Coach John Calipari decided to visit his biggest fan in hopes of bringing joy during his final hours.

As Kevin lay in a hospital bed, he whispered to him, “You get yourself healthy, you come with us.”

The boy who once had 24 hours to live defied the odds — slowly but surely regaining motor skills and his speech.

Six months after his diagnosis, Kevin returned to the classroom.

Following graduation from Indiana’s Franklin Central High School in August 2012, Kevin enrolled at UK. And Coach Cal made good on his promise — making him a student manager for the men’s basketball team.

“It’s not a matter of what happens to you, because some things are going to happen to everybody,” Kevin said in a previous interview with UKNow. “It’s all in your attitude and how there’s always something positive in situations. And there’s something in knowing that somebody has your back.”

Fast forward two years, when Marissa was faced with the decision of where to attend college, there was no question.

“For me, choosing the University of Kentucky was easy,” she said. “Not just because Kevin was already attending, but because it honestly felt like a second home every time I stepped on campus. I always felt like it was where I truly belonged.”

Then, it came time to choose a major.

Four years had passed since Marissa sat in an Indianapolis hospital fearing for her brother’s life, but she never forgot the support she received from a caring social worker.

“I remember the peace and calmness the social worker brought me and my family during the worst time of our lives. Often, siblings are overlooked in these situations — understandably so — but that was not the case for me,” she said. “Whether it was to check-in, give me resources, or to update me on my brother, she was there for me through the entire two-month stay. If it was not for these moments with the social worker, who knows where I would be today.”

“Social work is one of those unique professions where challenging life circumstances can make a person uniquely qualified to work with others,” said Jay Miller, dean of the CoSW. “Lived experiences — no matter how challenging — can connect an individual to the work in ways that are inexplicable”

“Just our experiences through Kevin’s diagnosis have been the catalyst for my career choices. After multiple stays in the hospital, my eyes and heart were opened to what people go through daily,” Marissa explained. “I noticed that a lot of people don’t have the same support my family has.”

And that support would prove to be invaluable.

Throughout her time at UK, Marissa had setbacks of her own — even having a health scare that impacted her mental well-being.

“This was not something I could just get through by myself, so I went to the Behavioral Health Clinic and to my professors,” she said. “Everyone was so understanding of my situation, and I would not have got through it without their encouragement and understanding.”

With their UK family by their side, the Massey siblings crossed the Commencement stage — Kevin in 2017 (College of Communication and Information) and Marissa, once in 2018, and again in 2020.

“Don’t be scared to ask for help. It’s crazy that I’m saying those words now because I was one of those people who thought I could ‘just get over it,’” she continued. “There are people who care for you and will help you get through whatever you are going through — use them. I would not be the social worker I am today without them.”

Life-defining moments — they have a way of enduring in our memories and creating meaningful change.

For Marissa, her brother’s diagnosis helped her face adversity, build resiliency and find joy in helping others.

Today, she leads with compassion as a social worker at Ascension St. Vincent/Peyton Manning Children’s Hospital — the same hospital where her brother overcame tragedy and triumphed.

Kevin still receives treatment and support there to this day.

Now, the teenage girl who found solace in a social worker is that beacon of hope for other patients and their loved ones.

“That is what I aspire to be every day — someone’s bright light during their darkest days.”