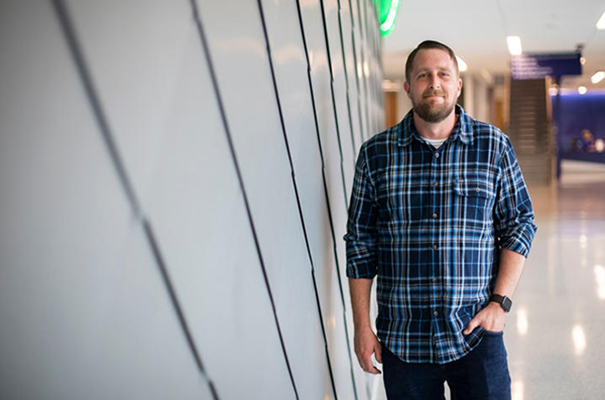 Have you ever pictured a moment so vividly you could feel it ­— the joy or sadness that accompanied what you were wearing and who you were with?

For Luke Ramey, there’s one moment in particular.

He’s dressed in a blue cap and gown while proudly walking across the Rupp Arena stage — putting one foot in front of the other until his outstretched hand reaches that coveted diploma. He’s chatting with mentors who helped guide him to success. But the celebration doesn’t stop after the tassels have been turned. There are family members giving warm hugs without warning and genuine smiles being captured in countless photos.

“I thought about how I might hang those pictures in my home and office,” Ramey said. “But as the late John Lennon once said, ‘Life is what happens to you when you are busy making other plans.’”

Ramey is no stranger to life not going according to plan. Behind every success, he has a story filled with struggle.

Now 37 years old, Ramey recalls growing up in Winchester, Kentucky, in a comfortable home surrounded by loving parents. But a traumatic experience as a toddler would have a profound impact moving forward.

“I was sexually assaulted when I was only 4 years old. At the time, I did not understand how the assault affected or influenced my thought processes or behaviors,” Ramey said. “But I did have a strong intuition that something about me was different from the rest of my peers.”

Ramey had difficulty maintaining positive relationships. In high school, he often felt awkward and uncomfortable — even around his close friends. As that social discomfort intensified, Ramey found a coping mechanism.

“I’ve struggled with a substance use disorder for most of my adult life,” he said. “When alcohol and drugs were introduced to me, I found a way out of the discomfort.”

Ramey’s life began to spiral out of control. That became even more apparent during a tragic incident following his high school graduation — a confrontation the local newspaper labeled “a drug deal gone bad.”

“My friend got involved in a conflict that ended up with him being thrown from the car,” Ramey explained. “I was one of a few people that held him in the middle of the street as the EMS arrived, and it was clear to me — he was not going to make it.”

At just 18 years old, Ramey had experienced immense loss, which led to crippling anxiety. “I spent the next 13 years of my life running from physical, mental and emotional pain.”

Falling victim to the relentless grip of substance misuse —​ Ramey admits resigning himself to a life not worth living.

For Ramey, the crash of hitting rock bottom was painful — but necessary.

“On September 29, 2013, I stopped using drugs and alcohol and have been sober ever since.”

That was just the beginning of Ramey’s upward climb. While working in a treatment center, he discovered his true passion and purpose — helping others achieve and sustain lasting recovery.

“I took an entry level social work course at Bluegrass Community Technical College, and I knew that’s what I wanted to do,” Ramey said. “The ability to help and to serve people and communities on so many different levels attracted me, and I felt as though I finally found a true calling.”

Determined to better his life — and the lives of those in the same position as he once was —​ Ramey transferred to the University of Kentucky College of Social Work in the fall of 2018.

He felt more prepared than ever to earn a college degree. But going back to school wasn’t without challenges. As a man with many titles — full-time employee, devoted husband and dedicated father of four — time was hard to come by.

“Sometimes, I was awake for more than 24 hours. I would take small naps in my car between classes,” Ramey recalled. “There were times I didn’t think I was going to be able to continue working as much as I was and be able to complete school.”

Ramey’s wife and young children served as his inspiration. And their support became a valuable source of strength. “Without the support of my loving wife, children, family and friends, I don’t know that I would have completed,” he said. “They all pushed me to succeed.”

“All of the faculty in the College of Social Work were incredibly helpful along my educational journey,” he said. “The educators and advisors provided an environment for me to learn in which I felt safe, confident and encouraged.”

Ramey’s journey at UK is far from over. He is currently employed as a prevention specialist with the HEALing Communities Study, which leverages existing resources and initiatives, in partnership with communities, to implement strategies and set evidence-based standards that will become a national model for fighting the opioid epidemic.

“Luke’s journey to the CoSW is such an inspiration to the UK community,” Jay Miller, dean of the CoSW, said. “His persistence and perseverance are a powerful of example of how individuals can leverage their life experiences for a common good.”

This fall, Ramey will begin working toward his master’s degree with the goal of becoming a licensed clinical social worker and a licensed certified drug and alcohol counselor.

“The CoSW has not only prepared me to be successful professionally, but they have all helped me to succeed in life. They set the example of advocacy, compassion and diligence,” he continued. “Since the COVID-19 pandemic hit Lexington, the dean, faculty and staff have poured their hearts into redesigning curriculums and regulations to coincide with new social norms. They have worked tirelessly to ensure that each and every one of us has the resources we need to finish our educational journey.”

Ramey may never get the Commencement ceremony he so vividly pictured. As a result of COVID-19, those congratulatory hugs and handshakes will have to wait.

“A moment of clarity came to me — there might not be a better way for a social worker to start off their career than with an act of love and humanity, such as social distancing,” he said.

Ramey’s willing to do what social workers do best — protect the vulnerable. But when it comes to pushing boundaries and pursuing goals, he’s encouraging others never to settle.

“You can and will achieve your dreams if you’re just willing to reach for it and accept the help that is available.”